Doctrines, Theology & Practices of the OAC 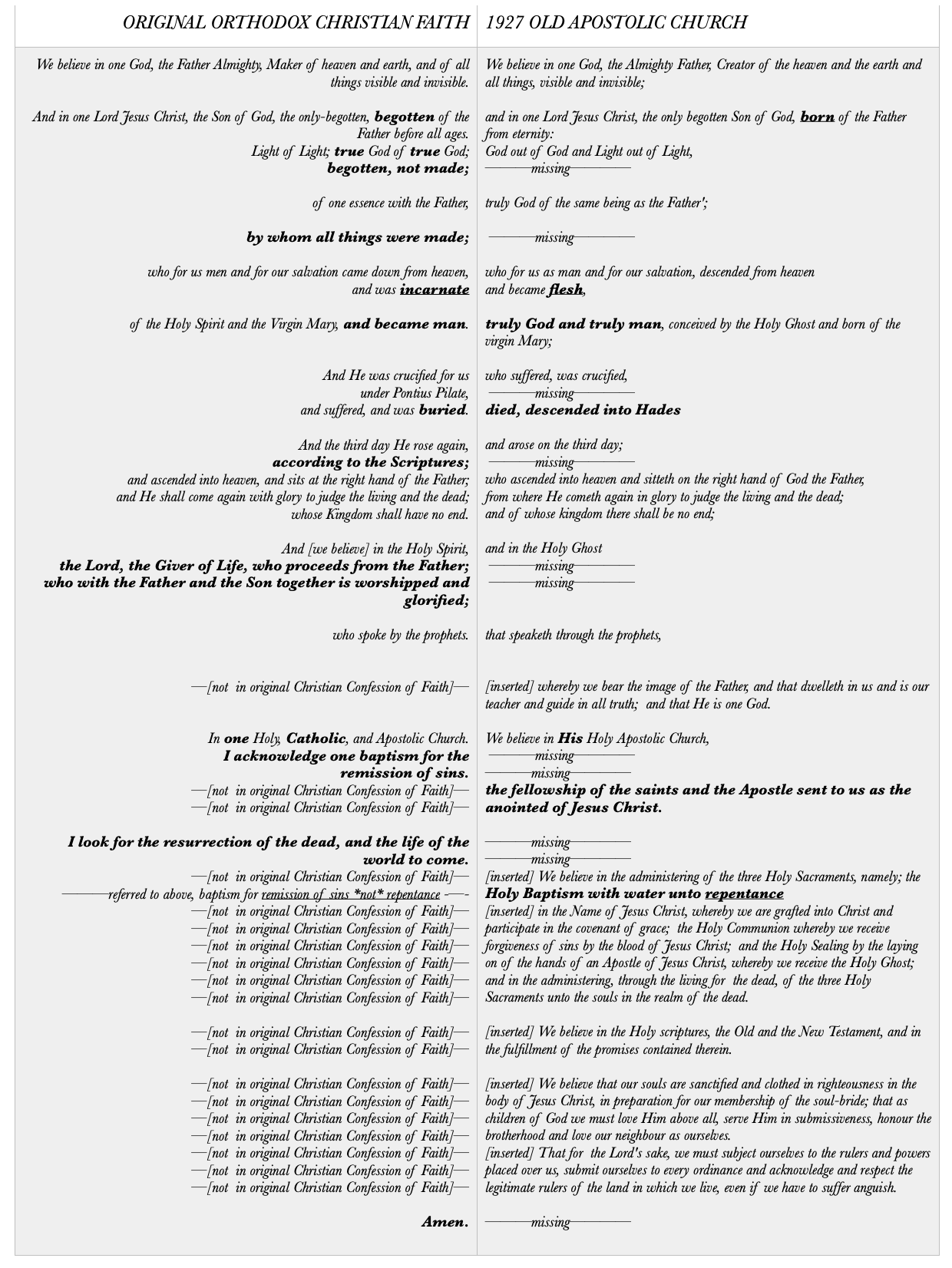 So, an OAC member may respond by saying,

“A few words are changed or added to the OAC document, that doesn’t make it a false doctrine”.

Yes, in the sense that, different arrangement of words, some omissions and additions do not necessarily contradict the original biblical faith.

No, in the sense that when insertions and variations of words lead to contradictory doctrine, then it is indeed a variation from the truth and at risk of being outside of “sound doctrine” as mentioned repeatedly by the apostles in the bible.

[I must add that there are various unnamed sects within the Old Apostolic Church that have not been identified by name but can be identified by belief. As you continue you may find that your congregation may have a different view than stated here. You should be aware that due to the lack of written doctrine, the views and beliefs can be the same or different between members, officers, congregations, elderships, overseerships, apostleships and countries. In fact, wherever there is a different leadership figure in the OAC, you may find subtle or stark differences in understanding of the basics of OAC doctrine. While this may appear as harmless, it is in fact detrimental to having a unified, sound doctrine and an impediment to receiving the fullness of the Christian and original Apostolic faith which is ONE faith, not many faiths.]

But First, Do differences in doctrine affect salvation?

The Confession of Faith is more than an organisation’s Mission Statement. In God’s church, it is the very foundation of the faith whereby you are either included or excluded through accepting or rejecting the faith.

I am not implying that you are damned if you do not abide within the original Christian faith. All people will be judged by Christ (Rom 14:10; 2 Cor 5:10) and Jesus Christ alone will look into our hearts. However, the surest way to gain, nurture and live out a life and relationship of salvation is to remain within the doctrine of Christ and the apostles as passed onto the bishops, priests, deacons and members throughout the ages.

As an example, please consider the following real life scenario:

According to this doctrine, a person can be led to believe that if they are in good standing with their priest then “the Lord knows their heart”. Salvation is essentially measured by the quality of the relationship one has with their assigned “shepherd”.

The above doctrine, while appearing harmless, may lead to a situation that can ultimately justify and excuse poor Christian conduct. An OAC member may feel peaceful in their heart having a good relationship with the priest and congregation, while their behaviour at home or in private, may in fact be abusive or neglectful to their family or their spouse. A person may indulge in pornography, hate, racism, gossip, jealousy and lust in their private time, yet have a good rapport with their priest and the members of the congregation. They may struggle and be overcome by various temptations, however, as long as their standing with the priest, congregation and activities are in good order, they believe themselves to have “soul salvation” and can sleep peacefully on their pillows at night.

In the above scenario, a member may believe that their standing with the Lord may be justified as acceptable because their priest knows their heart and “blesses” them. They also remain “blessed” when they attend activities as prescribed by the church. It will often be said by members that after an activity they can “lay down their head at night peacefully, knowing they have salvation”.

In contrast however, the original Christian faith would consider such teachings as misleading at best. At worst, these teaching may be considered demonic, since they completely delude the person by blinding them to their own sinful nature.

Sound doctrine holds that one’s relationship with God is first and foremost through prayer toward God who not only wishes to dwell within every person’s heart, but also exists beyond and independently of the person themselves. When one prays to God, one is not praying to God simply “within” the person’s heart. One is praying to God who existed before the entire universe was made. One is praying to God who created all things. One is communing with God who is indeed the almighty creator. Therefore having a good relationship with one’s priest is of little consequence if God almighty who created all things, looks into the heart and finds evil. (An apostolic will now respond by saying “But my priest is God in my life”. Again, I respond, the priest is not God. At best he may be a servant of God. The priest is a human who has good intentions, but cannot see into your heart and will not be judging you when you pass from the flesh.)