Doctrines, Theology & Practices of the OAC

Few Old Apostolics realise that their founder, George Klibbe had produced written documents of faith and belief which are in direct contrast to the belief held fervently by a majority of current living generations of Old Apostolics. The stark differences in worldview and doctrine between the current OAC and its founders, demonstrates the ease with which the Old Apostolic Church has changed over just a few generations. The teachings and understanding of the Old Apostolic Church, in the absence of written doctrine has a volatile, unrestrained and fluid nature, something foreign to ancient and Orthodox Christians who hold fast to that which has been given to them, passing it on without change to the next generations. In the scripture this is refereed to as “tradition” or “paradosis” in the original greek bible texts which are 2 millennia in circulation.

While anointed clergy are willing, obedient and most certainly sincere, virtually no officers in the Old Apostolic Church receive a biblical or theological education. There is also no access to formal documents of doctrine, barring the Confession of Faith and the bible (KVJ or NKJV in english speaking congregations). The organisation claims that knowledge is gained and given during the active participation in the “Body of Christ” and that God will provide what is necessary where vacuums of information or knowledge exist. This will be expounded in later chapters.

Due to the lack of formal and sound theological guidance and information, members are not aware that the the original Church which was established approximately 20 centuries ago, still exists today through Apostolic succession. Members and officers in the Old Apostolic Church, just as with many protestant and evangelical communities are unaware that the apostles ordained particular bishops to maintain, care for and lead the Church through guidance of the Holy Spirit.

At a rudimentary historical level, apostles Paul, Peter and John anointed Overseers/Bishops Linus and Clement of Rome, Ignatius of Antioch, Ireneaus of Lyon and Polcarp of Smyrna among others. The bishops were anointed to lead and guard the communities established by these apostles. They in turn were permitted, by the laying on of hands, to appoint successive bishops (overseers) and elders. Following the line of apostolic succession would lead any Christian to a startling conclusion: the original and ancient Church still exists today and has maintained the teachings and worship of Christ timelessly, unchanged by human innovation.

While the Old Apostolic Church is one of thousands of denominations that fragmented from the offshoots of the Roman Catholic Church, the Orthodox Church on the other hand has remained as the one true and unbroken Body of Christ from which the Western world parted due to papal instigation in the year 1054 (the Great Schizm).

In contrast, the original One True Holy and Catholic and Apostolic Church, the Orthodox Church, affirms that salvation is a mystery of God which only He will decide and that sound doctrine and worship from the Body of Christ is the surest way to accept God’s grace, mercy and salvation through the Lord Jesus Christ who is also God as the second person in the Holy Trinity.

The Old Apostolic Church has, within its communities, nurtured bold claims such as being “the one true way to God”, being “the only true church”, “the Church for which the bible was written”, among others.

This document is not not written to demean the members of the OAC, but rather to highlight the precarious mindset and framework of some members who are equally sincere and passionate with a willing desire to serve God.

In conclusion to the historical nature of the Old Apostolic Church, it is evident that it is a relatively young organisation which nurtures powerful claims to authority with no historical basis to do so.

Many church organisations claim divine authority through the calling of the Holy Spirit which may or may not be the case, however, at the most, it would place the Old Apostolic Church on the same grounds as thousands of other denominations vying for the same status. This historical dynamic renders the Old Apostolic Church’s unique claims as relatively common in comparison with many protestant, pentecostal, reformed and evangelical organisations.

The timeline below reveals the relative ages of organisations and churches in Christendom: 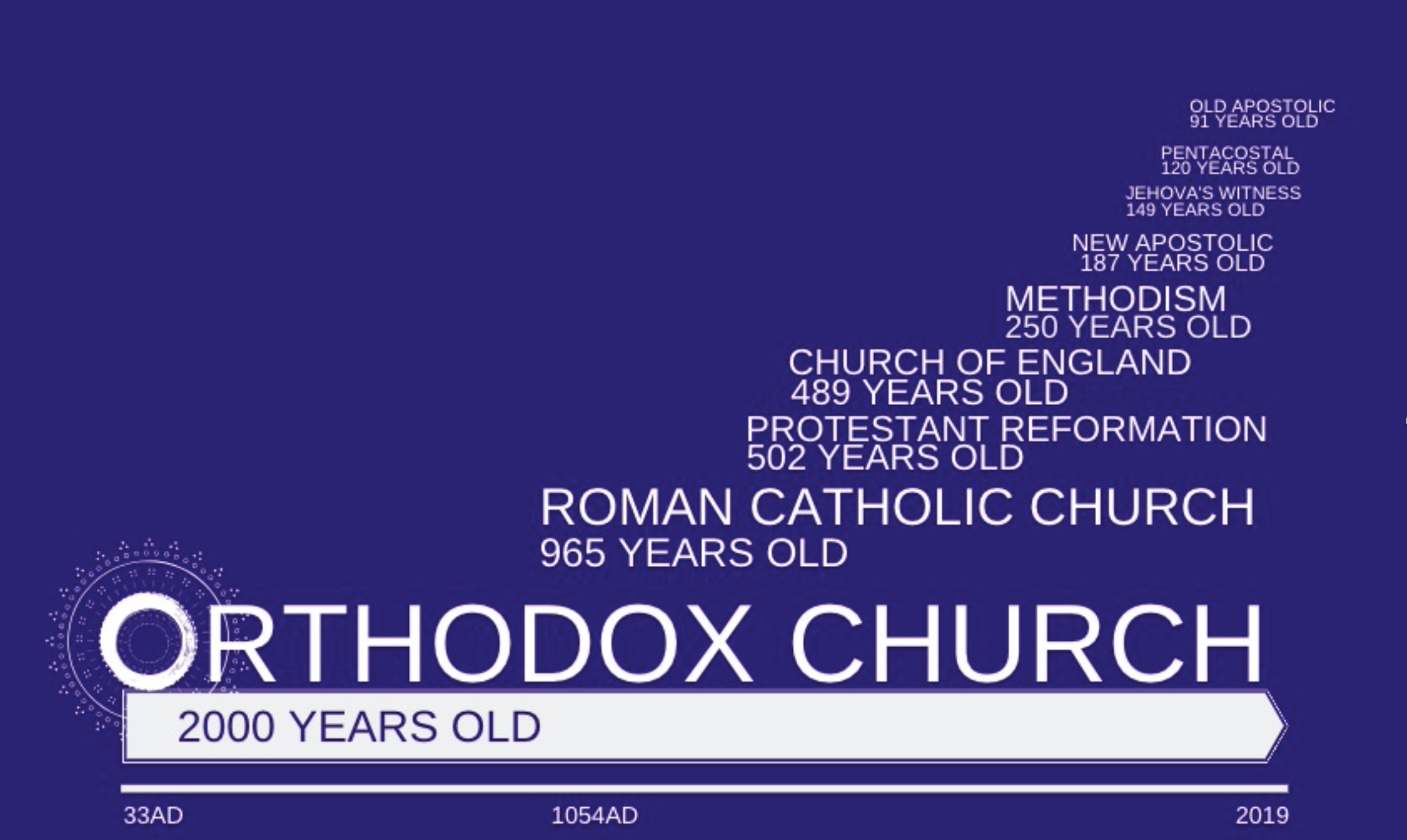